If it's not related to The D-Gen or any of the other threads, post it on here!

Since there isn't a thread on this magnificent sitcom and it's been mentioned a few times in other posts, lets start one.

Does this mean I should start one for Parks? :P

But seriously, it would be funny for people to go through the show and pick out all the film references in each episode, as there are almost at least a few per episode. The first episode was even dedicated to John Hughes as he had passed away not too long prior to the show airing, so plenty of Breakfast Club references just in that episode.
Whatever precautions you take so the photograph will look like this or that, there comes a moment when the photograph surprises you. It is the other's gaze that wins out and decides.
- Jacques Derrida
Top

baudrillard wrote:Does this mean I should start one for Parks? :P

Community is pretty much the best thing on TV at the moment. I'm so glad it's back.
Top

I may have a thing for Annie and Britta 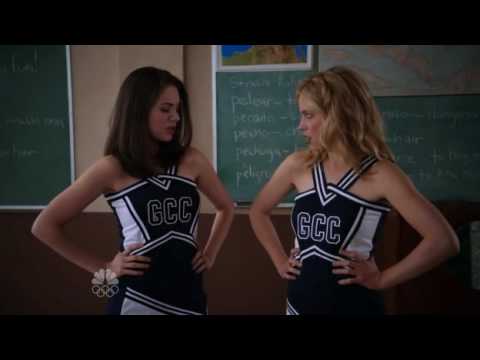 Hey those laws vary from state to state over there, yeehaw!

To be honest, I didn't like this first episode so much, too much clunky exposition of it's the start of another year at community college... I mean the season, but usually I do love the show.

I was thinking of a different one just a minute ago, but there's all those references to Senior Chang and the Karate Kid. And the campus pranks episode recalls Animal House, and all those great Jocks vs Nerds films of the 80s.

For those who don't know the show, not only are they pushing in the references through the dialogue, they also have a character who is actively suffering from almost some form of autism or something and sometimes it's not apparent if he can tell reality and tv apart as he'll try to characterise or orchestrate situations according to TV sitcom cliches.

That was it, the episode with the Mash theme right at the end! You really could watch the first season and pick them out as they went along!

Come on guys. Mindless trivia time when you watch the show. Don't forget to post them!

(P.S. if you don't have access or know how to access them, or anything else I ramble about and have a copy of, let me know and I'll see if I can fix you up.)

The most recent British comedy series I thought was pretty funny, Grandma's House, and don't forget the US's Party On - I was really surprised but that's what you seem to get out of shows that are axed (after one or two seasons), and with no hype, quality comedy ironically!

But yes, Community pop-culture references please people in your own time! It's no doubt a good drinking game!
Whatever precautions you take so the photograph will look like this or that, there comes a moment when the photograph surprises you. It is the other's gaze that wins out and decides.
- Jacques Derrida
Top

Do you mean Party Down Bauds?
Now a'Tweetin'.

D'oh! Yes.
Whatever precautions you take so the photograph will look like this or that, there comes a moment when the photograph surprises you. It is the other's gaze that wins out and decides.
- Jacques Derrida
Top
Post Reply
103 posts

Return to “Anything goes forum”