Super Dave wrote:Yes, Menagers you are correct. "Ziggy played guitars, Zig played with kids." A horrible way to remember which one is which, but effective nonetheless.

That's a useful mnemonic, I shall lodge that. Actually, Zig played a miniature banjo, which is like a pre-pubescent banjo, so the signs were always there. 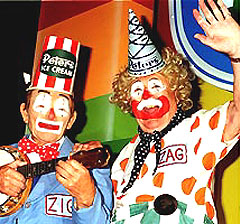 Amusing story my mum told me after she caught a glimpse of the Job Warehouse scene where she went to Job Warehouse back in around 1967 with her aunty to select the material for her wedding dress. When they arrived at the front door the security man (who she heard through the grapevine is the father of the security man featured on TLS) stopped them and asked what they were there for to which mum mum replied "To look at material" to which he quizzed further "Why?", to which she replied "For my aunty here to make my wedding dress", to which reluctantly sighed and said "Ok" and showed them where the materials were and then proceded to stand and not let them out of their sight whilist they looked at materials.
Top

That's quite a courageous sales technique. Full marks!
I just want to pop him on a bit of toast and eat him right up.
Top

Maybe the "material" business was just a front for the real goings on - making skin suits down in the basement.

Clearly, there is some sort of mental retardation going on there. This 1967 tale (thankyou - gold) proves that they must own the building outright, to which I splutter "Prime real estate!! Must be worth a mint!". Unless, it contains a portal to another dimension... Or maybe it's a muggle deterent to the Ministry of Magic... hmmm, yes, one of those.
Are you castin' aspersions on the habeebee?
Top

I hear if you tap the bricks out the back with an umbrella something magical happens...
Now a'Tweetin'.

When I went in there with a friend of mine we didn't really get hassled, just got asked if we needed anything.

We felt let down that it had returned to being 100% fabric sales at this point though, I was so keen for a used comb or broken shaver. Does anyone know when they stopped selling well labeled junk?
Top

I was going to say I wonder what happened to the busted shavers, etc in the window and if anyone actually ever bought them?
I've never ever actually been in there though the intention has always been there as I was really tempted from the other details from the same 1967 tale regarding the possum piss stenchl & the holes in the ceiling.
Top

You may or may not be interested to know that the Job Warehouse now has a website:

http://www.jobwarehouse.com.au/index.html
Actor Melvyn Hayes and stars of the Carry On films.
Top

There's nothing on that site that says 'No Filming'.
and calling it policy!
Top

rdmcphee wrote:You may or may not be interested to know that the Job Warehouse now has a website:


OMG, that is brilliant. Check out the horrible tiny illegible font on that site. I can't believe that site was only made in the last 3-4 years. You'd that if they could afford their own domain they could afford to get someone in who knows the basics of how to put together a freeservers or geocities template site at the very least.
I wonder if David Zeimer is the man who guarded the door from Mick, Tony & Santo's entrance.
Top
Post Reply
116 posts