Sounds like a capital idea. If it does surface I'll pass you on a photo of my noggin for you to weave some magic.
"Sir, do you realise you've got a kid attached to the back of your head?"
Top 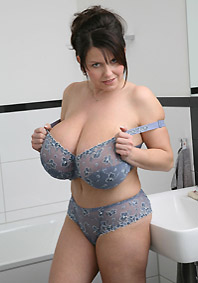 I hope those things are photo-shopped Sniv. Or imagine that poor woman's back! Ouch.
"it's my party and I'll cry if I want to"
Top

She has nice hair that woman.
Are you castin' aspersions on the habeebee?
Top

Needs to lean against her bathroom sink in order to stay upright.... but you're right, she does have nice hair.
"it's my party and I'll cry if I want to"
Top

of back pain?
Top

One of the things I remember from that live broadcast at Melbourne Town Hall is how often Mick and Tony told us (the audience) that they did not like most of the music that they had to play on Martin Molloy.

Tony replied, 'Well, we can always play a Sophie B. Hawkins song again."
".....that's what's ahead here on Martin Molloy; the only radio show with an inner core of sphagnum."
Top

There were many challenges on Radio Gladiators on Martin Molloy, and the prize for the winner was always a three-pack of CDs.

Mick and Tony were amused by this. They then asked the kid if Ray Decay was a character that he had thought up by himself, or the character was just him when he came home from school?
".....that's what's ahead here on Martin Molloy; the only radio show with an inner core of sphagnum."
Top

I wasn't there of course, but the tape of it will eventually get digitised, I think it's in 1997, and yes, I remember sadly how the Scared Weird Little Guys were received, and I'm pretty sure I remember how Tony had made that comment in dismay, but yeah he didn't of course say on air how much the music sucked. I had to think of the show as being two completely separate entities. One that was Tony and Mick and them piss farting about and doing sketches, impersonations and rants, and the other (all that you hate about radio) a world of commercials and stupid promotions and dumbass dumbed down versions of "news", but mostly a world of music that you would imagine Tony or Mick listening to never in their lives out of sheer disgust. And the repetition was like Get This, you could set your watch by the time of day that they'd play the Summer of '69. The joke Tony makes about how much they would play it, although we've now heard the gag so many times because we try and pick up every single appearance he makes, so on many different radio stations to so many different audiences, is for me so painfully true it may never lose its humourous appeal for me as it is etched into my brain. At least they'd get a count-down in the studio for when the shit was going to end so they didn't have to really ever hear it, but editing it on analog equipment... Oh the trauma and the horror, the horror.
Whatever precautions you take so the photograph will look like this or that, there comes a moment when the photograph surprises you. It is the other's gaze that wins out and decides.
- Jacques Derrida
Top
Post Reply
42 posts